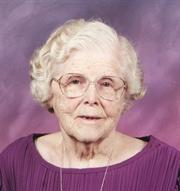 Berne - Alberta B. Wright, 97, passed away on Saturday, March 13, 2010 surrounded by her loving family. She was born to the late Clyde Ball and Alta Sholtes Ball on January 6, 1913. In June 1929 at the age of 16 Alberta graduated from Schoharie High School. She graduated from New York State Teachers College in 1933. In 1934 she married Raymond H. Wright, of whom she was married to for 53 years. She was an active member of St. Paul's Lutheran Church where she taught Sunday School and was treasurer for many years. While teaching and going to school, Alberta received a math-teaching degree in 1937. She had a passion for teaching math and she taught at Averill Park Central for 2 years, Berne-Knox Central for 15 years and Schoharie Central for 15 years. Alberta was a member of the National Education Association, Parent Teachers Association, a life member of Delta Kappa Gamma Fraternity, Eastern Star and the Hilltown Senior Citizens. She had a major part in the Berne Library where she helped start the Berne Historical Society. She is survived by her daughter Jean Wright of Berne, Grandchildren: Stacey Wright, Susan (Kevin) Pyne of IL, David (Carolyn) DeWitt and Jonathan (Angie) DeWitt of OH; Eight great-grandchildren Ben, Katie, and Jon Pyne, Alyssa, Laura, Josh, Rachel and Nick De Witt. She is also survived by a great nephew David (Holly) Clark of Berne as well as many nieces and nephews. Alberta is predeceased by her husband Raymond, daughters Ruth Elaine DeWitt, Janet W. Salzer, her grandson Timothy Salzer, a sister and brother-in-law Gertrude and Rev. Franklin Deitz. A funeral service will be held on Saturday, March 20, 2010 at 1:30 PM at St. Paul's Lutheran Church, Berne. Friends may call prior from 10 AM to 1 PM. A spring burial will be in Woodlawn Cemetery. The Order of the Eastern Star will conduct a service at 1PM. In lieu of flowers donations may be made In Alberta's memory to St. Paul's Lutheran Church, 1728 Helderberg Trail Berne, NY 12023.
To order memorial trees or send flowers to the family in memory of Alberta B. Wright, please visit our flower store.