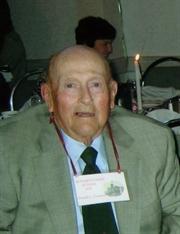 Guilderland Center - Arnold L. Crounse, 90, died on Friday, October 30, 2009 at The Fireman's Home in Hudson, NY. He was born on June 19, 1919 in Schenectady, to the late Walter and Ethel (Wood) Crounse. He then lived with and was raised by his grandparents the late Edward P. and Ida Crounse. He was a 1939 graduate of Altamont High School. He served in the Army Air Corps, 20th Air Force, during WWII in the Pacific. Just prior to his enlistment he married the late Hazel Janis Hawes. After the war he went to work for GE, until his retirement in 1981. Arnold was a 71 year member of the Guilderland Center Volunteer Fire Department, joining in 1938, during which he served as Commissioner and Treasurer of the District; he served as Chief two separate terms. He was also past presidents of the Hudson Mohawk Volunteer Fire Association, Hudson Valley Volunteer Fire Association, Guilderland Center Volunteer Fire Department, and the Albany County Volunteer Fire Association. He was also a member of the Past Chiefs' Association and various other firematic organizations. He was a charter member of the Boyd Hilton VFW post and a member of the Altamont American Legion. Arnold was a long time member of the Noah Lodge 754 of the Free and Accepted Masons, and a 57 year member of the Helderberg Reformed Church. He was a member of the Young at Heart Association and the Altamont Senior Citizens. Arnold is survived by two daughters Beverly A. (Steven) Harrington and Janis E. (Bud) Berschwinger; a son John A. (Kim H.) Crounse; five grandchildren, Melody A. (Paul Jr.) Goetz, Brian R. (Nicole) Crounse, Stacy L. Hover, G. J. Jones, and Stephanie M. Harrington; four great grandchildren, Allison and Paul III Goetz, Jeremy A. Hover, and Olivia H. Hanks; three nephews, Ronald (Sharon) Crounse, Donald (Pat) Crounse and Dennis (Susan) Crounse as well as many grandnieces and grandnephews and great-grandnieces and great-grandnephews. He is also survived by Charles (Bloodbrother) Witherwax and Bea C. Crounse. He is predeceased by his wife of 59 years Hazel Janis (Hawes) Crounse, a granddaughter Kimberly Salle Jones, brothers Kenneth E. (Elsie) Crounse and Harold E. (Helen) Crounse as well as Garry (Lelah) Fuller; also Mikey his constant companion of 15 years. A memorial Service will be held on Saturday, November 7, 2009 at 12:00 PM at Helderberg Reformed Church, Guilderland Center. Friends may call Friday, November 6, 2009 from 2 to 4pm and 5 to 8pm at the Helderberg Reformed Church, Guilderland Center. In lieu of flowers donations may be made in Arnold's memory to The Firemen's Home, 125 Harry Howard Avenue, Hudson, NY 12534, Guilderland Center Fire Department, PO Box 112 Guilderland Center, NY 12085, Helderberg Reformed Church PO Box 196, Guilderland Center, NY 12085, Hospice of Columbia-Greene 47 Liberty Street, Catskill, NY 12414 or the Masonic Brotherhood Fund c/o William Korn of Noah Lodge, 5934 Johnston Road, Slingerlands, NY 12159.
To order memorial trees or send flowers to the family in memory of Arnold L. Crounse, please visit our flower store.