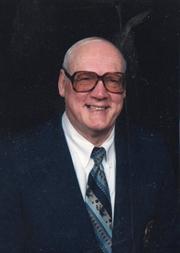 Schenectady-Charles T. Button, 87 of Schenectady , died November 12, 2011 at Ellis Hospital. He was born on Feb 13, 1924 the son of Arthur E and Julia (nee Marcy) Button in Syracuse NY. He was predeceased by his wife Eleanor on November 16, 2005, they were married on April 19, 1949. He survived by a son Arthur and his wife Margaret and a daughter Julie Button;a granddaughter Rebecca Button; his step granddaughters, Christine Tice and Catherine Rogers and his step-great granddaughters Jessica and Leanna Tice and Margaret and Janet Rogers. Charles grew up in Chittenango, NY where he attended Chittenango Central School, he then went on to Cortland State Teachers College where he received his B.S. Degree in teaching. He began his career as a science and physical education teacher. He later earned his masters degree from Cornell University in School Business Administration. H was principal in the South Otselic School District, Moravia District and Superintendent of Schools at Medina School District. He finished his career working as a bureau chief for the NYS Department of Education, retiring in 1985. He was the proud recipient of the first Honorary Life Membership by the NYS Transportation Association. Charles served in the Army Air Corps during WWII from 1943-1946. He was a gifted basketball player having played on many championship teams in high school, college and the Army Air Corps. He was elected to the SUNY College of Cortland Hall of Fame. He was a member of the American Legion, Lions Club, Rotary and also held office as Master of his Masonic Lodge. Calling hours will be held at Fredendall Funeral Home, 199 Main Street Altamont, NY on Thursday, November 17, 2011 from 3-7 pm. A funeral service will be conducted on Friday November 18, 2011 at 9:30 am in the funeral home. Interment will follow in the Scott Union Cemetery, Scott, N.Y. In lieu of flowers donations may be made in his memory to the Lions Club.
To order memorial trees or send flowers to the family in memory of Charles Button, please visit our flower store.