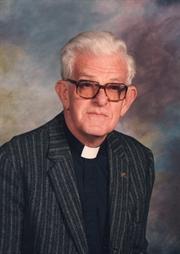 Berne - Clement U. Hulick, 88, died on January 23, 2011 at the St Peters Hospice Inn after a brief illness. He was born in Robbinsville, NJ on January 10, 1923 to the late Albert and Edna (MacDonald) Hulick. He received a bachelor's degree from Hartwick College in 1948, after a three year enlistment in the army. He was stationed in Alaska and was promoted to the rank of Sergeant. He taught at the Greenville Central School for 15 years until he went to work for the New York State Thruway Authority where he retired from in 1984. He was an ordained deacon in the Trinity Episcopal Church in Rensselaerville and Christ Church of Greenville for 48 years. He received the distinguished Silver Beaver Award for his service to the Boy Scouts. He was a past commander of the American Legion Post 291 in Greenville. He was a former president and active in the Helderberg Senior Center. Clem was a member of the Masons and the Hiawatha Dormansville Grange. He also donated his time to the Westerlo Food Pantry. He married the Late Sarah Porter in 1967. They celebrated 36 years together until her death in 2003. He is survived by three children, Wayne H. Porter and his wife Mariann of El Paso, Texas and their children Tammy, Jessie, Kenneth and Travis; Phyllis F. Townsend and her husband Donald of Berne, NY and her daughter Monica; James David Porter and his wife Jane of Voorheesville, NY, and their son Matthew. He is also survived by Edward's daughters April Lynn, and Kassondra; six great grandchildren and a great great granddaughter; his sister Eunice J. Hulick of Greenville, as well as numerous nieces and nephews. He also is predeceased by his son Edward John Porter, his grandson Joshua Porter and his brother Albert W. Hulick Jr. A funeral service of Christian Burial will be held at 11AM on Friday January 28, 2011 at the Trinity Episcopal Church, Rensselaerville. Friends may call on Thursday January 27, 2011 from 4 to 7 PM at the Fredendall Funeral Home, Altamont. A spring burial will be held in Woodlawn Cemetery, Berne. In lieu of flowers donations may be made to the Hilltowns Community Resource Center PO Box 147 Westerlo, NY 12193 or the Helderberg Senior Services Inc PO Box 18 Westerlo, NY 12193.
To order memorial trees or send flowers to the family in memory of Clement U. Hulick, please visit our flower store.