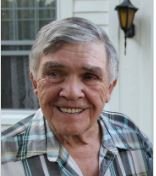 Ted was born on February 15, 1928 to the late Frank and Millie (nee Ball) Willsey. The seventh of nine children and raised on the family farm in East Berne, NY. A lifelong “Hilltown” resident, he attended Berne-Knox before entering the Sea Bees during World War II. On returning, he went to work at GE where he remained until 1986. After retirement, he worked part-time as and electrician and plumber, working on many homes, camps and restaurants on the hill. He was always willing to lend a helping hand.

He married Dorothy “Dotty” Lorraine Pitcher in 1951 and together they raised two children. They moved to Florida a time or two, but eventually moved back to Berne for their remaining years. They loved camping in their RV, spending time with their family and friends, playing Pitch and telling tales.

Ted was predeceased by his wife of 62 years, Dotty; his siblings Bob, Bill, Floy, David, Dot, Rusty and Chuck.

To order memorial trees or send flowers to the family in memory of Clyde E. Willsey, please visit our flower store.