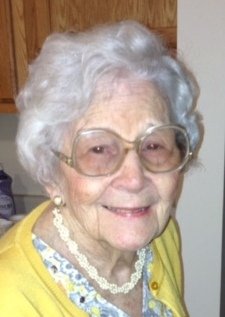 ALBANY – Dorothy DeCoux Schmuck, 102, passed away peacefully on Thursday, December 10, 2015 at Teresian House surrounded by her loving granddaughters. Dorothy was born September 2, 1913 in Buffalo, N.Y. to the late Marion Ruth DeCoux and the late Roy DeCoux. Dorothy was a graduate of Bennet High School and the Y.W.C.A. Secretarial School in Buffalo. In 1942 she married the late Ethan Allen Schmuck and had two children; Carol Schmuck Roemer, who predeceased her in 2012, and Robert Allen Schmuck. They moved from Buffalo to Albany in 1956 and in 1959, Dorothy went to work for the owners of Stuyvesant Plaza where she remained for 17 years. Dorothy resided at 21 Albright Ave. for 50 years until she became a resident of Atria Crossgates in 2006 and later a resident of Teresian House in 2013. Dorothy was blessed with excellent health her entire life, taking minimal medication even in her advanced years. She was an avid bridge player, sewer and baker. Dorothy will always be remembered for her sweet but tough demeanor and her subtle sense of humor. She was a devoted and caring mother, grandmother, great grandmother and friend. Dorothy is survived by her son Robert A. Schmuck (Janet) of Reno, Nevada, her devoted granddaughters Amy Chiplock (Mark) of Medway, Massachusetts and Ali Steeves (Dave) of Sandwich, Massachusetts and her cherished great grandchildren Tyler, Reagan and Christian Chiplock and Jake and Kyle Steeves. Her family expresses their heartfelt thanks to all of Dorothy's special friends who provided her with loving care and support in her advanced years, especially Elaine and Jim Roemer, her devoted niece, Nancy Reed, and the 6th floor staff of Teresian House, particularly, Janice Garavelli. A memorial service and celebration of Dorothy's life will be held on Monday, December 14, 2015 at 10:00 a.m. at the Hamilton Union Presbyterian Church at 2291 Western Turnpike in Guilderland. In lieu of flowers, contributions in Dorothy's memory may be made to Hamilton Union Presbyterian Church.
To order memorial trees or send flowers to the family in memory of Dorothy D. Schmuck, please visit our flower store.