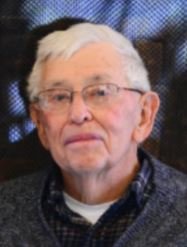 Earl F. MacMillen passed away peacefully at 85 years old in his home on July 25, 2016, spending his last days surrounded by his loving family. He was born in 1931, at his family's farmhouse in New Salem, to the late Hiram and Dorothy MacMillen. After graduating from Voorheesville High School, Earl worked for the Senate as a page boy. Then, Earl and his brother/best friend, Wilkins (Sam), built Tastee Treat, their ice cream business, in 1954 and ran it together for many years. He was employed and enjoyed working for the N.Y. Department of Transportation for 35 years. However, Earl found his true passion in farming, always at his happiest when baling hay or riding on his tractor. He began helping on the farm when he was just 4 years old and continued farming until he was 81 years old. In the 1980's, Earl and his wife Beverley bred and raced standardbred race horses at Saratoga and a multitude of other racetracks. Additionally, some of Earl's other accomplishments were a Deacon, a Sunday school teacher and a supervisor at the New Salem Reformed Church, where he met his wife of 52 years. He was a past member of the New Salem Volunteer Fire Department and Red Man's Hall. After retirement, Bev and Earl enjoyed traveling throughout the United States and Europe. Earl was well loved, appreciated and respected by his family and throughout the community. He is known for his devotion to his family and his hardworking nature. Earl enjoyed teaching his children and grandchildren important life lessons and was always there to give advice and support. Earl is survived by his wife Beverley (Frisbee) MacMillen; their children. Dawn (Ken) James, Janet (Lawrence) D'Angelo and David (Alysa) MacMillen; his grandchildren Sarah, Heather, Haley, Michael, Cayle and Ian; his great grandson Jeremiah; his 3 nephews; and a long list of extended family and friends. Predeceased by his brother and best friend Wilkins (Joan) MacMillen. Relatives and friends are invited to pay their respects at the Fredendall Funeral Home. Calling hours will be Saturday, July 30 10:00 a.m.-12:00 p.m. The funeral service will be at 12:00 p.m., burial to follow at the Onesquethaw Union Cemetery. Memorial donations may be made in memory of Earl MacMillen, to the New Salem Fire Department 694 New Salem Rd. Voorheesville N.Y., 12186.
To order memorial trees or send flowers to the family in memory of Earl F. MacMillen, please visit our flower store.