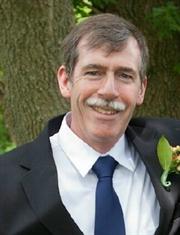 It is with much sadness that the family of Edward P Schmitt announces his passing. He passed suddenly but peacefully in his sleep at home on July 3rd,2012. Ed was a selfless man who found immense enjoyment in volunteering his time and knowledge to those who needed help. In the true spirit of his selflessness his organs have been donated to helping those in need. He will be sorely missed by his family and friends. His incredible sense of humor and pure joy for life will be forever remembered. Ed was Born April 2nd, 1955 in Islip, NY to the late Robert Schmitt and Kathryn Higgins Schmitt. Ed graduated from Chatham High School and went on to SUNY Brockport to gain his bachelors degree. After college he made his home in Knox, NY with his family where he has resided for the past 32 years. Ed was a man of many talents and had most recently worked at AFF in Guilderland, NY and part time at Home Depot, Albany , NY. Ed also volunteered his time with the Knox Youth Council and had previously been a longstanding member of the Knox Volunteer Fire Department. Ed leaves behind to honor his memory the following -His best friend whom he was married to - Edie Schmitt of Knox, NY, Daughter - Sarah Pasquini of Knox,NY, Son-Kristopher & Christine Schmitt of Lagrange, NY, Son-Matthew & Mary Schmitt of Schodack, NY, Amy & Chris Matthews of Germany, Sara & Patrick Riniker of Nampa, ID, Katie & Nick Carollo of West Warwick, RI, Aaron & Amber Sleichter of San Jose,CA. His much beloved grandchildren, Abigail & Madison Pasquini, Collin Schmitt, Saoirse,Isobel & Maren Matthews, Samantha, Jack,Matthew, Hannah,Isaac &Evelyn Riniker, and Dominic & Jordan Carollo. Also survived by loving sister Patricia Bassette and brother Bob & Lynn Schmitt. Ed also leaves behind many cousins, nieces, nephews and friends that he loved dearly. Calling hours will be held at the Fredendall Funeral Home in Altamont, NY on Friday July 6th,2012 from 5PM-8PM. A funeral service will be held at St. Lucy's Church in Altamont, NY on Saturday July 7th at 10 AM, followed by an interment in Knox Cemetary, Knox, NY. In lieu of flowers Ed asked that donations be made in his name to the American Red Cross at ARCNENY, 33 Everett Road, Albany, NY, 12205.
To order memorial trees or send flowers to the family in memory of Edward Schmitt, please visit our flower store.