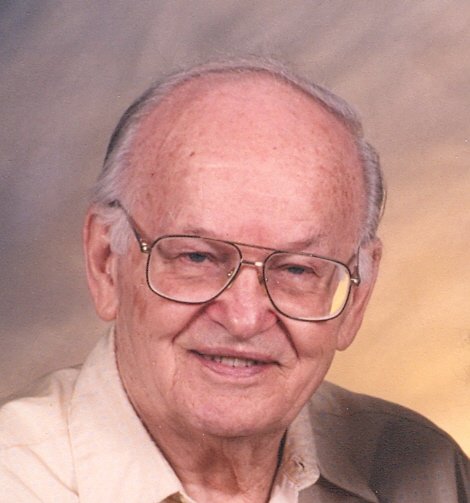 Eugene R. Lemmerman, a man who gave the world and his family a legacy of service, faith and love through example, died July 28, 2014, after a brief illness, surrounded by family. Gene was 89. Gene was born in Sauk Rapids, MN, July 7, 1925, one of seven sons of Emily (Glatus) and Peter Lemmerman. He served in the US Navy during WWII as Electronic Technician's Mate, Second Class. Following his service he graduated from the University of MN with a BS in Electrical Engineering. In October, 1950, he married Pauline Williams from Newbury, VT. He was inspired to serve and witness after attending a missionary's workshop. With the encouragement of his pastor he left GE in Schenectady, NY, to attend the Lutheran Seminary in Chicago, IL. In 1963, with his family, he departed for Liberia, West Africa. He began his journey of faith and service to others, utilizing his engineering knowledge to make a greater positive impact in Africa. He and his family returned to the US in 1972. Liberian Proverb: "To the patient man will come all the riches of the world." Gene's riches were measured in his heart and soul by the lives he touched and the knowledge he imparted to others. During his service in Africa, he taught skills, strategies, basic academics; he modeled his faith; and he encouraged his students to broaden their horizons through gardening/farming, mechanics, building radio communications, and sportsmanship. His knowledge, dedication and commitment earned him the affectionate title of "Iron Man" by his students. He returned to work for GE and retired in 1986 from the Ordinance Division in Pittsfield. MA. He permanently settled in Knox, NY, where he built a home with his own hands and the help of his family. Gene continued to serve through many projects including the Maritime Ministry at the Port of Albany, the St. John's Community Men's Breakfast that supported many charities. He continued to financially support many students in Liberia to advance their education even during civil war, just to name a few. Gene is survived by his younger brother, Ellard Lemmerman of Rice, MN; wife, Pauline; his children, Linda Garbellano of Glenville, NY; Steven Lemmerman and wife Mary Anne of Ghent, NY; Gregory Lemmerman of Knox, NY; James Lemmerman and his fiancée Maria of Rome, NY, and Deborah Romano and her husband Joseph of East Longmeadow, MA. He is also survived by several grandchildren, great grandchildren and great, great grand children. Gene is predeceased by his parents and brothers, Harold, Earl, Donald, Robert, and Duane. A memorial service will be held on Sunday, August 10, 2014, at St. John's Lutheran Church, 140 Maple Avenue, Altamont, NY 12009 at 2 PM with a reception to follow in the Fellowship Hall. A burial service has been planned for 11 AM, Monday, August 11, 2014, at Gerald B. H. Solomon Saratoga National Cemetery, 200 Duell Road, Schuylerville, NY, 12871. Sentiments would be welcome at the Fredendall Funeral Home website: fredendallfuneralhome.com In lieu of flowers, Gene would have been proud to see you "pay it forward" with contributions to the "St. John's Building Fund" of St. John's Lutheran Church, 140 Maple Ave., Altamont, NY 12009 or to a charity close to your heart in his memory.
To order memorial trees or send flowers to the family in memory of Eugene R. Lemmerman, please visit our flower store.