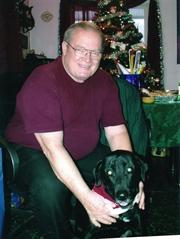 Knox- George K. Martin, 67, died on Wednesday, March 25, 2009 after a short illness. He was born in Albany on July, 6 1941 to the late Earl and Elizabeth Martin. A 1960 graduate of the Berne Knox Westerlo High School, George was an avid athlete and starred in baseball, basketball and soccer. After high school he went to work in the wood, wire and metal lathers union. Shortly thereafter he was drafted in to the army and spent two years overseas. Upon his return, he returned to work as a carpenter (Local 370) for over 40 years. George enjoyed bowling in the Jolly Mixed League as well as coaching his children's sports teams. George is survived by his wife Elaine of over 40 years; three sons George Jr. (Jen), Chad (Stacey), and Scott (Mary); seven grandchildren, Noah, Hailey, Alea, Zachary, Tyler, Ryan, and Zachary (Lonergan); a brother-in-law Chuck (Vicki) Pollock; his mother-in-law Barbara Pollock; special friends, Barb Henderson and Noel Hatley and special girl Kasey; as well as many nieces and nephews. George is predeceased by his sister Barbara Santo and two brothers Ralph and Gordon Martin. A funeral service will be conducted on Saturday, March 28, 2009 at 1:30 pm at the Fredendall Funeral Home, Altamont, followed by an interment in Prospect Hill Cemetery. Friends may call on Friday, March 27, 2009 from 4 to 8 pm.
To order memorial trees or send flowers to the family in memory of George K. Martin, please visit our flower store.