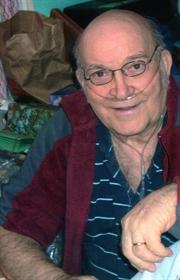 Knox- George A. Van Etten, 76, of Knox died peacefully in his sleep, at home on August 22, 2009 after a long illness. Born in Schenectady, he was the son of the late Percy and Mary Van Etten. The husband of 52 years to Janice T.Van Etten. He was a career NY State employee in various capacities, this day job helped to support his dream, Van Etten Farm. His life's work was his 300 acre farm, were he planted 50 acres of Christmas trees. He had 40 head of cattle, as well as chickens and pigs. He gave fall hayrides and cut and sold firewood, maybe you to have visited Van Etten farm, on the hill. He was a long time member of the Helderberg Kiwanis, Knox Fire Dept., Knox Reformed Church, and a 4-H leader. George is the father of Jeffrey (Patsy) Van Etten, Judy (Andy) Niedzielski, Sue Mason, Nancy (Keith) Stewart, Andrew Van Etten and foster son Raymond (Cindy) Butler. He loved his 16 grandchildren and many nieces and nephews. He was the brother of the late Lawrence (Barbara) Van Etten, Elizabeth (Simon) Van Der Snoek, Ida (Fred) Saburro, and Mary Clark. A funeral service will be conducted at 1pm on Saturday, August 29, 2009 at Knox Reformed Church followed by internment at Knox Cemetery. Relatives and friends are invited to call at Fredendall Funeral Home, Altamont, on Friday August 28, 2009 from 4 to 7pm. In lieu of flowers, contributions can be made to the Knox Reformed Church P.O Box 86, Knox, NY 12107 or the Knox Volunteer Fire Dept. P.O. Box 131, Knox, NY 12107.
To order memorial trees or send flowers to the family in memory of George A. Van Etten, please visit our flower store.