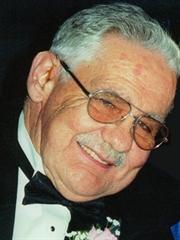 Clarksville-Harold J. Houck, Jr., 75, died March 28, 2009 at St. Peters Hospice Inn. He was born on August 29, 1933 the son of the late Harold and Christina Houck in Albany, NY. He is survived by his wife of 56 years Micheline (Mimi), his children Kim (Jeff) Blanchard, Laurie (David) Lettrick, Jacquie Reardon, Nanette (Skip) Seaburg and Nicholas (Tammy) Houck. He is also survived by 15 grandchildren, 4 great grandchildren, 7siblings and many nieces and nephews. He was predeceased by his brother Roger Houck. Calling hours will be on Monday March 30, 2009 at Fredendall Funeral Home, Altamont, NY from 4-7pm. A funeral service will be held on Tuesday March 31, 2009 at 10:30 am at the Clarksville Reformed Community Church. Interment will follow at the Onesquethaw Union Cemetery. In lieu of flowers donations may be made in his memory to the Clarksville Community Church or the Onesquethaw Ambulance Squad.
To order memorial trees or send flowers to the family in memory of Harold J. Houck, please visit our flower store.