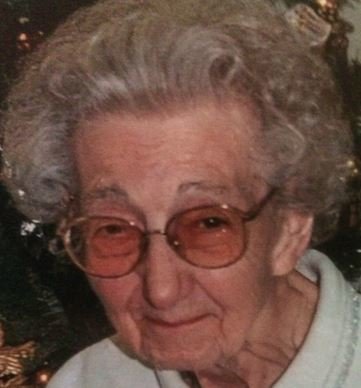 Altamont- Helen Edna Winkler Fries passed from this world on February 27, at Our Lady of Mercy Life Center in Guilderland, N.Y. She was surrounded by her loving family who were at her side, not only to witness her passing but also to celebrate her 95th birthday, on which she was reunited for a birthday dance with her husband of 59 years, Robert Fries. Helen was born to the late Fred and Jennie Winkler, at the family homestead, in Salisbury, N.Y. She was the oldest of seven children. Along with her husband, she was predeceased by her brother, Ralph Winkler; her sister, Marion Fox; and her son-in law Louis Tolliver. She was married to "Bob", who was from "the big city" of Schenectady, NY on July 27, 1946. The only event that interrupted their romance of 59 years was Bob's passing in 2005. To help with the war effort, Helen worked at General Electric. At the time, she worked with Lee, Bob's sister, who suggested Bob would love to receive letters from back home while he was stationed in the Pacific with the 5th Army Air Force. This began their courtship until his return from the service, when after a few months, he asked for her hand in marriage. The rest, as they say, is history. After her youngest child started school, she started working for the Guilderland Central School District in the cafeteria. Helen later attended, Spencer Business School to learn data processing, and went on to work at Schenectady International where she became fast friends with Peg Rau. After their retirement these two ladies would often be gone for hours,"just for coffee and to catch up on the news." Helen and Bob were founding members of the Altamont Station Squares, square dance group, the Senior Citizens, was an active member of the Altamont Reformed Church for over 60 years and a member of the VFW Ladies Auxiliary, where she often baked pies for the various dinners. She loved to read and reminisce, picnics, pansies and popcorn. Helen loved spending time with her family, playing dominos, where she always seemed to win every game. Helen always greeted everyone she met with a smile and had a great sense of humor. Helen is survived by her four children, Thomas Fries, and his wife, Jan, Howes Cave, NY, Karen Scolaro and her husband, Ken, Schenectady, NY, Debra Sivack and her husband, Stephen, Altamont, NY and Paul Fries, Defreestville, NY. She also leaves behind her cherished grandchildren, John, Krista, Kenny, Heather, Jennie, Shaheed, and Nikolai and five great grandchildren. She is also survived by her siblings Robert Winkler, Doris MacIntosh, Stella Dillon and Glen Winkler, as well as many nieces and nephews. Calling hours will be held on Tuesday, March 1, 2016 form 10Am – 12noon at Fredendall Funeral Home, 199 Main Street, Altamont with a funeral service to follow at 12 Noon. Interment will be at Schenectady Memorial Park. The family wished to thank the staff of Our Lady of Mercy Life Center for the loving care she received. Although flowers are welcome, contributions can also be made to the Altamont Reformed Church, 129 Lincoln Ave., Altamont, NY 12009 or the Boyd-Hilton VFW, the Ladies Auxiliary, 11 Mill Street, Altamont, NY 12009. Online condolences may be made at www.fredendallfuneralhome.com
To order memorial trees or send flowers to the family in memory of Helen E. Fries, please visit our flower store.