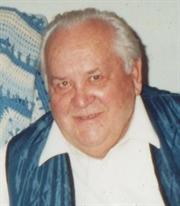 Castleton - Ivan E. Baker, 85, died on Wednesday, November 18, 2009 at home surrounded by his family. He was born in Delanson on January 29, 1924 to the late Merrill and Ollie Baker. In 1942 he graduated from the Berne Knox Central High School and then served in the US Army during WWII. In 1943 he married his wife of 47 years Florence Mildred Rendo. He went to work for New York Telephone and Telegraph until 1953 when he left to own and operate the South Bethlehem Grocery Store. He then owned and operated the Castleton Supermarket until 1978 when he went to work for Montgomery Ward's, where he sold appliances until his retirement in 1988. He was very active as an elder in both the ministry of Schodack and Altamont Christian and Missionary Alliance Churches. He is survived by six children, Larry (Sherolyn) Baker of Cummings, GA, Nadine (John) Tanner of Rensselaer, Dianne Rieck of Nassau, Ellen Honsinger of Castleton, David (Virginia) Baker of Perth, and Gearold (Amy) Baker of Ghent; 24 grandchildren; 19 great grandchildren; 3 great great grandchildren; two sisters, Evelyn Zeh of Slingerlands and Dorothy Wyatt of Bradenton, FL as well as a daughter-in-law Lonna Baker. He is predeceased by his wife Florence Mildred Baker; two sons Leonard and Mark Baker; a brother Walter Baker and a son-in-law Garry Honsinger. A funeral service will be held at 10AM on Monday November 23, 2009 at Fredendall Funeral Home, Altamont, followed by an interment in Knox Cemetery. Friends may call Sunday from 4 PM to 7 PM at the Fredendall Funeral Home, Altamont.
To order memorial trees or send flowers to the family in memory of Ivan Empie Baker, please visit our flower store.