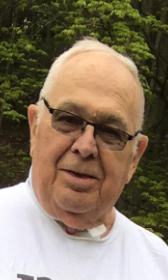 James Keough 79, of  Knox, NY passed away peacefully surrounded by his loving family on November 12th. James was the son of the late John and Isabel Keough and husband of the late Blanche (Macejka) Keough. James grew up in Schenectady and graduated from Mont Pleasant High School in 1959.  After graduation, he enlisted in the United States Marine Corps where he served in the 3rd Recon as a machine gunner for four years. After the Marine Corps James served on the Capitol Police in Albany where he met his beautiful wife Blanche. They were married for twenty seven years until her untimely passing in 1993. Jim joined the State Police in June of 1965.  Jim married Blanche in 1966 and had four devoted children. He proudly served on the State Police for thirty four years. Among his accomplishments in the State Police he was most proud to be the first Trooper to be asked to be a K-9 handler. His dog Baretta became his faithful partner for many years. Jim and Baretta were at the 1980 Olympic games in Lake Placid, NY where they provided security for the athletes and attendees. They were also involved in many capers arresting desperados for years. Jim loved the State Police and his experiences so much he wrote his book The First K-9 Trooper in the New York State Police in 2015. Jim was a generous person to all who crossed his path especially his four children and his eight grandchildren.

Jimmy, Colleen, John and Erin are happy to know that James and Blanche are finally reunited after so many years apart. Their love was one for the books.

In lieu of flowers please consider donating to Signal 30. Signal 30 supports the members of the New York State Police and their families in extraordinary circumstances such as death, illness, injury and loss. Signal 30 also offers an extensive scholarship program to benefit the children of Troopers.

To order memorial trees or send flowers to the family in memory of James Edward Keough, Sr., please visit our flower store.