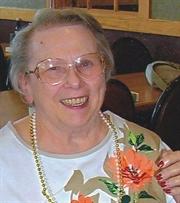 Fish, Janet M. ROTTERDAM Janet M. Fish, 82, of Rotterdam, died Wednesday night, December 8, 2010 at The Avenue Nursing Home in Schenectady. Born in Cleveland, Ohio, she was the daughter of the late Emil and Lillian Cisar. She grew up in Cleveland and is a graduate of Case Western Reserve University. Janet was a nuclear chemist with the Atomic Energy Commission at Oak Ridge, Tenn. from 1949 to 1952. She then worked as a chemical engineer at the GE Knolls Atomic Power Lab from 1952 until her marriage with Dr. Richard A. Fish in December 1956. They operated the Schenectady Veterinary Hospital from 1956 to 1973. Janet then received a master's degree from SUNY, Albany and taught science and math at Mercy High School in Albany, retiring in 1993. Janet loved God, family and being active in the Princetown Evangelical Presbyterian Church. She treasured the prayers, visitations, care packages, and friendship she received from the wonderful members of this special church. Her hobbies included writing, gardening, painting and quilting. She was thrilled to be crowned Mother-of-the-Year at the 2009 Tulip Festival in Albany's Washington Park. Janet was predeceased by her husband, Richard, a veterinarian who served as an Army Captain during the Korean Conflict and her brother Earl Cisar, who died in the Battle of the Bulge in 1945. She is survived by her daughter Emily Haynes (Mark) of Nederland, Colo.; and her sons, William Fish (Kathy) of Amsterdam, Daniel Fish (Deborah) of Princetown, and James Fish of Schenectady. She is also survived by eight grandchildren. Visitation will be at the Fredendall Funeral Home, 199 Main St, Altamont, N.Y. on Monday, December 13 from 5 to 8 p.m. Funeral Services will be at Princetown Evangelical Presbyterian Church, 3662 Gifford Church Rd., Duanesburg, N.Y. on Tuesday, December 14 at 10 a.m. Relatives and friends are invited to attend. Interment will be at Schenectady Memorial Park on Gifford Church Rd. immediately following the service. Many thanks are extended to the staff at The Avenue, especially those at Nursing Station A-1, for their excellent care over these last five years. In lieu of flowers, donations may be made to the Missionary Fund at Princetown Evangelical Presbyterian Church, 3662 Gifford Church Rd, Duanesburg, NY 12056.
To order memorial trees or send flowers to the family in memory of Janet M. Fish, please visit our flower store.