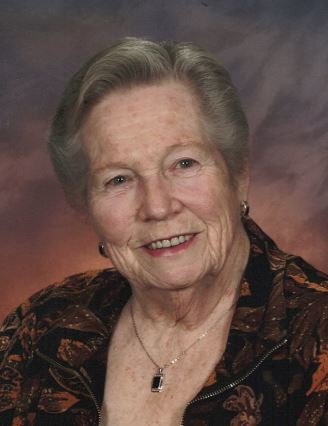 Janet K. Simons was born Nov. 5, 1929, the youngest daughter of Arnold and Emily Keenholts of Altamont, NY. She inherited her father’s toughness and love of gardening and her mother’s mischievous good nature and love of playing cards. Although quite smart, she admitted to focusing more on boys and entertainment as she progressed through Altamont’s elementary and high schools. A dedicated life-long Lutheran, she was guided by a story-book case of divine intervention when she met and quickly married Jacob V. (Van) Simons, Sr. of East Berne. Over the next several decades, she devoted herself to raising her four children, sometimes augmenting the family’s modest income through part-time secretarial work, with never a complaint and little thought of herself. Her husband’s career took the family briefly to Rock Island, IL and then to Memphis, TN for several years. Upon his retirement from civil service, they were able to return to New York, initially living in Richmondville before building their dream home on beautifully wooded family land in East Berne, where Van’s family had once grown hay and pastured dairy cows. As her children pursued their adult lives, Janet continued to excel as a care-giver for extended family members needing help toward the ends of their lives. And when Van fell victim to Lewy body dementia, she nearly exhausted herself in faithfully caring for him at home until his final days. At that time, she sacrificed her beloved home to remain near him. This led her to Albany’s Avila Retirement Community, where she lived comfortably and happily through her remaining years following Van’s death. Throughout these years, she relished the arrival and growth of many grandchildren and great-grandchildren, by whom she was universally respected and loved. Always upbeat and fun to be with, she was a popular member of multiple game-playing groups, e.g. cards, dominos, bingo, etc. She retired from these activities only in July of 2019, when the combined effects of rheumatism, gout, thyroid removal, and a heart condition left her bed-ridden under the care of her two oldest daughters, assisted by Home Hospice. Janet remained fun to talk to through her closing days, resting at peace and well-prepared to embark on the next stage of her eternal life, which she entered on Jan. 24, 2020, at the age of 90. Janet was preceded in death by her beloved parents (Arnold & Emily Keenholts), husband (Jacob V. Simons, Sr.), older sister and husband (Laura Margaret and Theodore Beebe), three brothers-in-law (Hadley, Charles and Bill Simons), and one grandson (Christian Simons). She is survived by her children Janet (Albany), Laurie (Tennessee), Jacob Jr. (and Carol Simons of Statesboro, GA), and Vickie (and Tim Staup of Lima, OH); sisters-in-law Vaughn (Altamont) and Betty (East Berne) Simons; and nearly two-score nephews, nieces, grandchildren, and great-grandchildren. A calling hour will be held on Saturday, February 1, 2020 from 10-11AM at the Helderberg Evangelical Lutheran Church, 1720 Helderberg Trail, Berne, NY 12023. A funeral service will follow at 11AM. Interment at Fairview Cemetery, Altamont in the spring.
To order memorial trees or send flowers to the family in memory of Janet K. Simons, please visit our flower store.