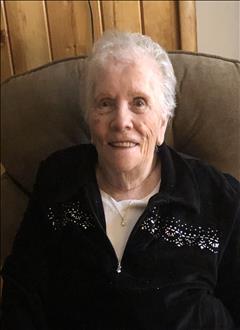 Settle, Joan E. -  Altamont
Joan E. Settle, long time Altamont and former Knox resident passed away December 9th with her loving family at her side. Born December 24th 1929, she was the daughter of the late Everett and Florence (Honor) Tibbitts. Beloved wife of the late Ivan Settle.
Following Joan's graduation from Mount Pleasant High School, Joan worked for a brief time at General Electric in Schenectady. Marrying her husband Ivan Settle of Knox in 1949 Joan settled into her role as the family homemaker often referring to herself proudly as the 'Farmer's wife'. Joan will be remembered by her family as a loving mother and grandmother. Joan was a proud breast cancer survivor having defeated breast cancer a total of three times.
Joan is survived by her children Sherrie (Joe) Pasquariello, Thomas Settle, and Debra (David Gray) Settle; her grandchildren Brian, Kristen, Timothy, Michael, and Andrea; 9 Great Grandchildren and 1 Great-Great Grandchild and a host of nieces and nephews.
Family and friends are invited to visit with Joan's family on Tuesday December 13th from 5-7PM in the Fredendall Funeral Home 199 Main Street, Altamont. A prayer service will follow the visitation in the funeral home. Interment will take place in the spring in Knox Cemetery.
The Settle family would like to thank the Albany County Community Hospice for their kind and compassion care during Joan's final days of care.
In Lieu of flowers kindly consider a donation in Joan's memory to the American Breast Cancer Foundation at www.ABCF.org.