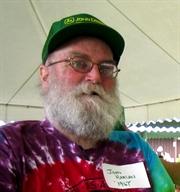 Altamont - John G. "Wizard" Harlan, 61, on Wednesday, December 15, 2010 went home to be with his lord after a 40 year struggle with health issues as a result of a Glioblastoma brain tumor. Born on June 20, 1949 in Schenectady, NY, he was the son of the late Robert and Jean Harlan. He was a 1967, graduate of Schalmont High School and in 1970 he graduated from SUNY Morrisville. In 1983 he was the successful recipient of a kidney transplant. He was employed by Harlan Manufacturing, Harts Plumbing and Chuck Miles Indian Motorcycle Shop. John is survived by his wife of 33 years Linda Harlan; a daughter Stacy (Mark) Sowalski; a son Robert (Jessica Warner) Harlan; four grandchildren Jonathan Csontos, Ashley Weatherwax, Christopher Csontos and John W. Harlan; a sister Anne (Daniel) Krajewski as well as many nieces, nephews and cousins. He is predeceased by a niece Michelle Corvinelli and a grandson Jess James Weatherwax. A Mass of Christian Burial will be held at 10 AM on Tuesday, December 21, 2010 at St. Lucy's / St Bernadette's RC Church, Altamont. A spring burial will be in Esperance Cemetery. Friends may call Monday, December 20, 2010 from 4 to 8 PM at the Fredendall Funeral Home, Altamont. In Lieu of flowers donations may be made to the American Brain Tumor Association 2720 River Road, Des Plaines, IL 60018
To order memorial trees or send flowers to the family in memory of John G. Harlan, please visit our flower store.