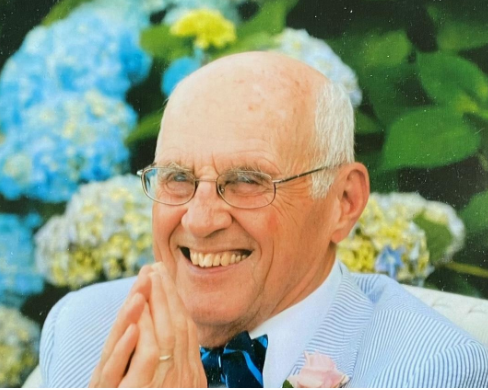 Joseph Edward Purcell, 84, of Albany, NY, peacefully passed away on June 21, 2021 after an extended battle with Alzheimer’s and Cancer – it took two of the world’s worst diseases to get the better of Joe.

Joe was born on October 9th, 1936 to Loretta and William Purcell in West Granville, NY. He spent his childhood in West Granville with his parents, older sister, Patricia, and younger brother, Robert.  His work ethic was on display from a young age, asking his father if he could go to first grade at the age of four.  Suspecting the idea would last a day, his father said, “yes” and 12 years later he graduated from Granville High School. He spent his summers helping his grandfather sell vegetables to local restaurants and taverns by hauling the produce, serving as the “Brakeman” (literally pulling the emergency brake to stop the truck) and sipping a Coca Cola at each stop while his grandfather enjoyed a pilsner.  Later he would work at Wilson’s, the local clothing store, dressing the finest of Granville.

Joe attended SUNY at Albany graduating in 1957 with a B.S. degree in Mathematics and a member of the Sigma Lambda Sigma fraternity. More importantly he met his future wife, Eileen Mary Lalley Purcell, and they married on December 28th 1958 – with a moderate degree of concern from their parents given it was one semester into Joe’s first year as a math teacher at Guilderland Central High School and one semester before Eileen graduated from SUNY at Albany. However, Joe and Eileen didn’t want to waste any time in starting their lives together.  Joe went on to earn a M.S. degree in Education (1960) and a P.h.D. in Guidance and Personnel Services (1972) both from SUNY at Albany.  Joe served as a Math teacher at Guilderland for three years before stepping into administrative roles as a Guidance Counselor, Director of Guidance and Vice Principal from 1961 to 1984.  In 1984 Joe became the Principal of the Farnsworth Middle School where he served until his retirement in 1991.  His passion for education was evident from the hop in his step as he walked the halls with a smile on his face and an occasional whistle. Throughout Joe’s career as an educator, he was focused on the success of each student through an emphasis on instruction, staff development and support for student learning.  His work ethic remained consistent as he made himself available to students and staff at any time.  He also contributed more broadly as a presenter and writer to many conferences and seminars throughout New York State and the Northeast.  In 1991 he was awarded the Principal of the Year for the Greater Capital Region.  After retiring from the Guilderland School District, Joe worked for the School Administrators Association of New York State from 1991 to 1997 as the Deputy Executive Director and serving as a consultant for school administrators across the state.

About a year after his fifth son was a born in 1979 – a surprise of the highest degree – Joe made the wild decision to purchase a plot of land in the Adirondack Mountains along the Hudson River and build a camp in North Creek that could serve as a jumping off point for skiing at the nearby Gore Mountain and enjoying all that the other three seasons had to offer in the mountains.  Joe was the “do it yourself” kind of guy long before it was a slogan for big box hardware stores, so with no prior construction experience, plans were drawn up for a simple two bedroom – one bunkroom for the sons and one for Joe and Eileen - home. Joe elicited friends and family to help in the construction. Joe’s dad was an amateur electrician, so he wired the house, the more adventurous hammered the tin roof and with the exception of a visit from a bear that forced Joe and his son Mark out of their camper and up to the unfinished second floor loft to sleep under the stars with the mosquitos, it was one of Joe’s greatest life experiences. Over the course of the last 40 years, several room additions have been made to grow with his family – first the daughters-in-law’s room and then for the grandchildren and finally the grand addition when Joe and Eileen moved there permanently in 2006, returning to Guilderland in 2014. The camp has played host to countless gatherings of family and friends and has been a special place for Joe’s family – even serving as the topic of one of his grandchildren’s college essays. It was Joe’s most favorite place.

Joe was an active member in his church, Christ the King, and community – both in Guilderland and North Creek.  He was a member of the Knights of Columbus and a longstanding volunteer of Community Caregivers and North Country Ministry, and he attended thousands of sporting events and activities participated in by his sons and grandchildren. He will be remembered for installing his own inground pool, baking an immeasurable number of chocolate cookies, for building everything from tree forts to chicken coups for his grandchildren, for the infinite love he had for his wife, the happiness he had around his children and grandchildren, and the countless lives he made better.

Calling hours will be held Thursday, June 24th from 4:30pm to 7:30pm at Fredendall Funeral Home in Altamont, NY. Services will be held at Christ the King Friday, June 25th at 11am with a celebration of life to follow. In lieu of flowers, donations can be made to Community Caregivers

To order memorial trees or send flowers to the family in memory of Joseph E. Purcell, please visit our flower store.