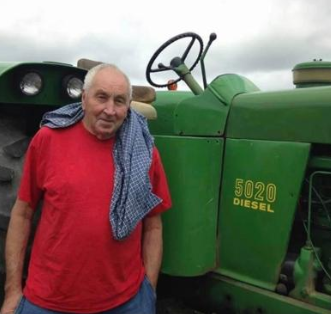 My dad was a guy that not only his family could go to for help but the entire community. Often I would walk to the barn with my coffee in the morning to talk . There was always neighbors and family solving the farm problem of the day . I recall one morning my uncle Ernie saying to me ‘we’re just sitting here solving the world’s problems Jack’ as they sat on bales of hay discussing politics. My dad was involved a bit with local politics, noting that he knew he didn’t think he would win, but just did it so there would be a choice. Growing up all of us kids always knew where to find my dad if we had an issue we needed advice on, you would first check the barn

Then the fields . He had a huge heart for everyone, my siblings and I and all the grandchildren just looked to him as a mentor.

He was just always there for everyone.

His mental strength and stability was amazing.

And it was so true his will to live was unbelievable, and he accepted all of it with grace. He would have four hours of chemo in the afternoon and then I’d pass him on the road later driving a tractor pulling a load of hay. I’d throw my arms up like what are you doing you’re supposed to be resting - and he would smile and wave .

He was a one man show dairy farmer for 56 years , never took a day off And was able to raise a family of 5. we always had what we wanted- even not within reason - he found a way- during times when most dairy farmers went out of business because the agricultural economy in the country was so poor.  At 75 he fell off the silo and broke his back- it was at that time he first stopped milking in order to recover . But he did come back and 6 months later he and my brother, Ken, went into the business of raising heifers and calves and continued to produce crops , hay, oats, corn for other farms in the community. I think at one time they had about 66 in the barn of small calves to feed plus heifers.

My dad’s brother Ernie would then come over every morning in these last ten years or so and they worked together on equipment repair and feeding the cows, since my brother also had a fulltime job outside the farm during the week.

At age 80  my dad came to me and said ‘ have I showed you my leg?’  One look and I knew he needed imaging ASAP- that started our acquaintance with this insidious diagnosis of leiomyosarcoma. We learned all about this rare cancer. Sarcoma is a soft tissue cancer accounting for only 1% of all cancers in adults. My dad would joke’ did you know I was one in a million “. His diagnosis, although devastating did not stop him, he just accepted it and had a will to do whatever it was going to take to keep going.

He had proton beam radiation in Boston for six weeks, then multiple intense surgeries at memorial Sloan Kettering in Manhattan, as the cancer was deemed inoperable in this area. I’ll never forget him telling the surgeon at Sloan

I raise heifers, and the drs face’ what is a heifer’

We knew this was the best shot at survival.

The treatment was a success and he was cancer free for two years, and he did regain his full strength and was working full time again.

The last 3 years once the diagnosis returned, involved many scans, different chemos, and multiple radiation visits to control the growth.

My dad continued to be active and sometimes didn’t even tell me when he had a treatment scheduled and just drove himself . He chose to receive treatment locally this time as he was that much older and wanted to stay close to home.

He continued to work...in the barn, in the fields, right up until sometime this past October then had two bad falls, broke his back again, . Was determined to be home, refused rehab so we brought him home rehabbed him there and he did walk again and was independent with the walker.

Us kids then took turns staying with him just to oversee that he didn’t fall again. I was amazed at how many visitors from the community he would get on a daily basis. It really brought him joy.

He just had this incredible outlook to accept life

Good and bad as the way it’s supposed to be’

A man with such an easy going way but always there to give guidance.

On friday as he got weaker and more short of breath I asked him if he wanted me to put oxygen on him and he matter of factly replied’ you May have to’  I thought- here he is dying and still helping me with decisions. This all just seems so empty now

The barn ,the fields, the whole area. End of an era

Born on July7th,1935, he was the son of the late Clyde Crawford and the late Millie McNab. He was predeceased by his companion Norma Saddlemire,and his brother Howard Crawford.

Ken was a long time farmer in the hill towns, who enjoyed working and family gatherings. He accepted everything in life with grace and had an amazing will to live.

Due to Covid-19. A memorial service is deferred.

The family would like to thank Dr. Wrzesinski (NYOH), Dr. Denniston (SPH), Dr.Perrotti(SPH), The community Hospice, Dr.Yoon of Sloan Kettering and Dr. Delaney of Massachusetts General Hospital for their expert care and collaboration.

Contributions may be made to Memorial Sloan Kettering Cancer Center

To order memorial trees or send flowers to the family in memory of Kenneth Crawford, please visit our flower store.