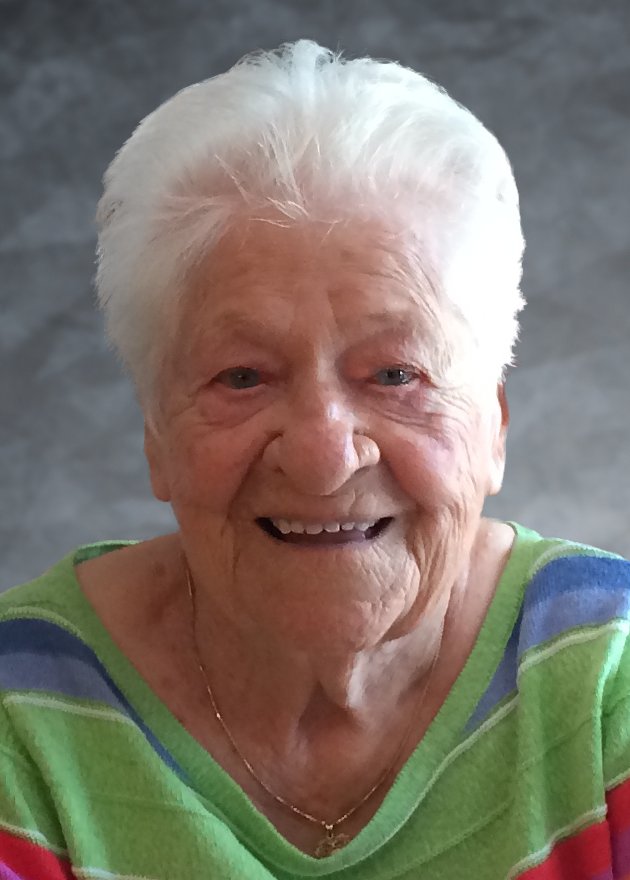 Born on July 11, 1920 in the small town of Danville in the Province of Quebec, Canada, Marie Jeanne was orphaned at the age of two when her mother, Anna Rivard, suddenly died of pneumonia after childbirth. Her baby brother, Philippe, was taken in by the neighbor family and she was taken in by her relatives, Alcide and Lucie Boisvert. Marie Jeanne would always refer to them as her mother and father. Her biological father, Nestor Gouin, hitched up his team of horses and travelled west to Saskatchewan with his two sons, Georges and Laurent in a covered wagon. Marie Jeanne was eventually reunited with her brothers and father later in her life. Marie Jeanne was educated in the one-room schoolhouse that was within sight of her home. Her parents encouraged her to continue her education and sent her to Ste Ursula Normal School in Ste Ursula, PQ. She referred to this time of her youth as being in the convent. She graduated and was employed as the teacher in the very same one-room schoolhouse she attended as a child. As a young woman, she was often solicited to act in the local village plays. She would sometimes refer to herself as an actress when joking with her children. Her aspirations as an actress soon halted when she started to date her future husband, Leo Beliveau. He would often play his guitar and fiddle with the locals in small taverns in and around Danville. And so, he too put his aspirations aside and trained to become a tool and die maker in Montreal, PQ. In 1941 Marie Jeanne and Leo were married and moved to Montreal on Hadley Street in the old part of the City. Four children later, they purchased a small tavern in St. Stanislas de Kostka, just north of the US border. In 1959 they immigrated to the USA, now with eight children, and purchased a mobile home park in Schodack, NY. Two more children would be born in the US; and in 1967 they purchased a farm on Old State Road in the town of Guilderland. Her loving husband of 59 years, Leo, died in 2000. Because Marie Jeanne had been raised as a single child, her dream was to have children . . . lots of them. God was good to her and blessed her with ten! They are: Pierrette Barnoski, Pierre (Melinda), Omer (Brenda), Denise Hadley (Gene), Helen Lasher (Ron), Louise Guagliardi (deceased), Marie Viscio (Nick), Andre (Yvonne), Daniel (Linda), and Michelle Masi (Jimmy). Mimi, as she was known by her 17 grandchildren and 28 great grandchildren, was loved and admired; and she was often sought for advice and cheerful consultation. Her unconditional love guaranteed that she would be surrounded by her entire family and many friends. Marie Jeanne was a faithful member of St. Madeline Sophie Church and the Faith Sharing Group. In recent years she has been a member of St. Lucy-St. Bernadette Church in Altamont.
To order memorial trees or send flowers to the family in memory of Marie Jeanne Beliveau, please visit our flower store.