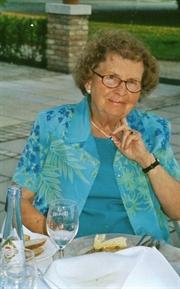 Marion Amsler-Burns, fondly called "Omi" by her grandchildren, passed away on December 17, 2009. She was 82 years old. Marion was a 9 year resident of East Berne, NY. She died peacefully at St. Peter's Hospice in Albany, NY after a valiant battle with cancer. Her family was by her side. Marion was born on March 2, 1927 in Spandau, Germany to Elizabeth Anna Schell and Karl Leuchs. She had one brother, Karlheinz, who passed away in 2004. Marion grew up in Berlin, Germany during World War II. She told many stories of her experiences during the war to her children and grandchildren. Marion eventually became a licensed esthetician but her greatest love was singing. She performed at the Munich Opera House and continued singing throughout her life. In 1951, she married Waldemar Sahm. They had two daughters, Regina and Jutta. After their marriage ended, Marion began a new life and immigrated to the United States with her daughters. In 1965 she married Chester T. Amsler and also became step mother to his step son Claus. Marion embraced her new life in America and settled into a happy routine of homemaking. Marion and Chester had a daughter, Carrie. Chester died after a long illness in 1988. Marion found solace in her children and grandchildren and took up gardening which she grew to love. She was well known for her "green thumb" and could make anything grow. Marion married Victor L. Burns in 1993. Victor also loved music and played many instruments. Many a Sunday afternoon was spent singing and playing the violin. Victor passed away in 2000 after a brief illness. Marion loved spending time with her grandchildren. She especially loved to cook the fresh fish that her grandsons often brought back from their fishing excursions. She spent many hours telling her grand-daughters old German fairytales. Marion was a member of the South Berne Congregational Christian Church. She was also a member of the Hilltown Gospel Singers, the Foxenkill Grange, South Berne Seniors and the Edelweiss German Club. Marion is survived by her three daughters, Regina Cole of Delanson, NY, Jutta (Yuly) Nosenzo of Litchfield, CT and her husband Donald, and Carrie Becker of East Berne, NY. She is also survived by her step son, Claus Geiger Sr. of Waterford, NY, 7 grandchildren, Claus Geiger Jr, Jaan Geiger, Tyler Cole, Edward Boruta, Jonathan Boruta, Lacey Becker and Eden Becker and 2 great grandchildren, Tori and Devin and several cousins in Germany. Marion's love of singing, adventurous spirit and kind hospitality will be missed by many. We are grateful for her long and rich life and for the lessons she taught us. A funeral service will be held on Monday, December 21, 2009 at 12 pm at the Fredendall Funeral Home, Altamont, followed by and interment in Prospect Hill Cemetery. Friends may call prior from 10 to 12pm. In lieu of flowers, donations may be made to the Community Hospice Foundation, 295 Valley View Blvd., Rensselaer, NY 12144.
To order memorial trees or send flowers to the family in memory of Marion H. Amsler-Burns, please visit our flower store.