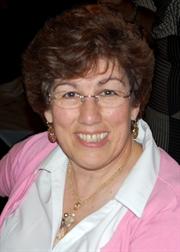 Maryellen Tucker Hamilton, 55, of Berne, passed away peacefully, surrounded by her family on November 28, 2010, after a courageous battle with cancer. She is survived by her loving husband of 34 years, James Hamilton of Berne, daughters Ellen (Robert) Eden of Glenmont, Sara (Ryan) Eschenroeder of Lake Hopatcong, NJ, Julianne Hamilton of Brooklyn, NY, and her beloved grandson, Benjamin Eden of Glenmont. She is also survived by her mother, Mary Tucker of Andes, NY, her brothers, Stephen (Alice) of Bloomville, NY, Howard J., of Bridgton, ME, Richard, of Andes, NY, Allen (Krista Scott), of Atlanta, GA, and Edward (Lyna) Tucker of Newport News, VA, her sister, Kathleen Tucker Smith of Delhi, NY, and her sisters-in-law Suzanne Tucker and Sharon Tucker, as well as a large extended family. She was predeceased by her father, Howard F. Tucker and her brother, Daniel Tucker. Maryellen was born in Albany, NY on September 5, 1955, the oldest of eight children and grew up in Voorheesville, NY, attending St. Madeline Sophie Elementary School and Voorheesville Central School. After her family moved to Bovina, NY in 1970, and later to Andes, NY, she graduated a year early in 1972 from Delaware Academy, in Delhi, NY. After high school, she attended SUNY Delhi and Maria College School of Nursing. She began dating James Hamilton in 1974 and they were married August 28, 1976 in Andes, NY. They settled in Voorheesville, moving to Berne in 1983 after their third daughter was born. She graduated as Valedictorian from Ellis Hospital School of Nursing in 2009, receiving awards for the highest Grade Point Average and for top surgical skills. Until she became ill, she was pursuing a Bachelor of Science in Nursing Degree at SUNY College of Technology. During her life, Maryellen was a highly respected staff member of several Capital Region medical practices, including Child's Hospital, Dr. Orkan Stasior, Kansas Eye Surgery Associates and most recently, Albany Regional Eye Surgery Center, where she was the Director of Refractive Surgery. Maryellen had a giving spirit, often volunteering her time for the community. She was a long-time member of the Hilltowns Players, participating in many aspects of the organization including producing, costuming, acting, and many officer positions. She also provided assistance with productions at Berne-Knox-Westerlo High School, worked with her husband on The Fox Creek 5K Road Race, was a member of St. Bernadette's Roman Catholic Church and the Town of Berne's Democratic Committee and president of The Berne Democrats Social Club. In addition, Maryellen was well known as an excellent cook who made everything from scratch and loved to sew and knit, even making her own wedding dress and her husband's wedding shirt. She also enjoyed sewing dresses and Halloween costumes for her daughters, and later, her grandson. She was devoted to her husband and daughters, supporting all their endeavors with the same fierce love that she later showed her grandson. She was an avid reader and loved skiing, hiking, biking, camping and gardening. She will be missed dearly for her larger than life personality, leadership, integrity, intelligence, strength and dedication to her family, friends and coworkers. A Mass of Christian Burial will be held on Saturday, December 4, 2010 at 10 AM at St. Lucy's/St. Bernadette's Roman Catholic Church, 109 Grand Street, Altamont. Friends may call on Friday, from 4 - 8 PM at the Fredendall Funeral Home, 199 Main St. Altamont. In lieu of flowers, donations may be made in her name to St. Peter's Hospital Foundation, 319 South Manning Blvd, Albany, NY 12208.
To order memorial trees or send flowers to the family in memory of Maryellen T. Hamilton, please visit our flower store.