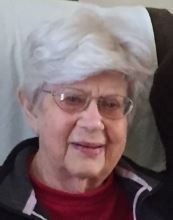 Pattie Moore Gray died June 7, 2018, aged 95. Born on November 7, 1922, in Washington, DC, to Lee V. Moore and Pattie Tatum Moore, she was proud of her family's North Carolina heritage. She was predeceased by her husband, Rev. Douglas W. Gray, on July 30, 2017. Pattie described her childhood hometown of Washington DC, as a "sleepy southern town." When she was young, her family attended the former First Presbyterian Church in Washington DC, next to the US Capitol, where the Rayburn House Office Building now stands. Childhood summers were spent at the family cottage on the Severn River in Maryland, with her parents and brother, Sam, where she excelled on the local club's swim team. Pattie attended George Washington University, graduating in 1944, with a major in sociology. Pattie then enrolled in Princeton Theological Seminary, as a member of the first female class of Directors of Christian Education. At Princeton she met her future husband Douglas Gray, a divinity student. They were married in 1946, when he flew back from his Navy Chaplaincy posting in Oakland, California. After they were married, Pattie moved to Oakland and worked in a local mission. Upon Doug's discharge from the Navy, Pattie and Doug moved to Doug's first parish, the St. Regis Presbyterian Church in the Adirondack village of Paul Smith's, NY, where Pattie said she spent the first winter with her southern feet in the oven to keep warm. The following years saw moves to five other parishes in New York State. Pattie and Doug raised their family in Guilderland, NY, where Doug served as minister of the Hamilton Union Presbyterian Church. Later while serving in the parish of First United Presbyterian Church in Oneonta, Pattie served as chair of the Presbytery of Susquehanna Valley Task Force on Women in the Church. Summers alternated between their camp in the Adirondacks where she helped her kids catch red efts, taught them to appreciate fireflies, and protected them from night time visits from bats, and her family's cottage in Maryland, where she taught her kids to catch blue crabs off the end of the pier, and to identify birds. A lifelong birder, Pattie had a remarkable recall of songbird calls. When Doug retired in 1987, Doug and Pattie purchased a 30 acre sugarbush in Schoharie, NY, and produced maple syrup for many years. Although boiling down the maple sap frequently kept them up until 2AM when the sap was running in March, Pattie described the experience as a lot of fun. She took great pleasure in playing games with her grandchildren there, and tromping through the snow on snowshoes with them exploring the woods. Pattie had a deep interest in, and understanding of, the history of the Christian church, and had an uncanny ability to identify the denomination of a church building by its architecture. Throughout her adult life, she listened avidly to the daily news, and recently lamented the divisiveness that has grown in this country and around the world. Pattie was survivor of colon cancer in 2007, and displayed a quiet, stoic tolerance of personal discomfort. Pattie is survived by her children Roger (Monica), Portia Hubert (Gary), and Lee (Beth), and her grandchildren, Matthew Hubert and Christine Hubert. She was predeceased by her brother Samuel Varick Moore. A memorial service followed by a reception will be held at 11AM on Saturday, July 7, at the Hamilton Union Presbyterian Church, 2291 Western Avenue, Guilderland, NY. Memorial gifts may be sent to the Hamilton Union Presbyterian Church, or to The Wild Center, 45 Museum Drive, Tupper Lake, NY.
To order memorial trees or send flowers to the family in memory of Pattie Gray, please visit our flower store.